Volunteer for the Hard Stuff – A Spotlight on Scott 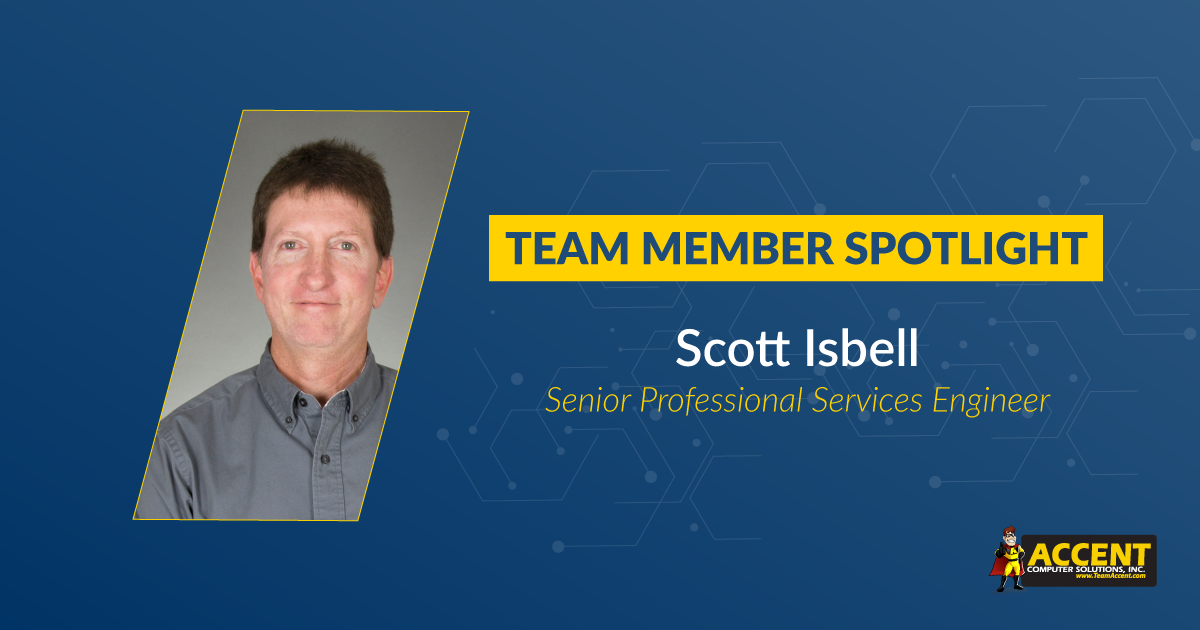 Scott has a reputation for being a closer at Accent. If there’s a project that’s getting tricky, or an escalated issue that’s not getting solved, he’s the guy to bring in to find the best way forward.

As Senior Professional Services Engineer, Scott gets to work with the newest technology and tackle the toughest problems. It’s work that pulls from the huge knowledge base that he’s built in his 30+ years of experience, and it feeds his insatiable hunger for learning.

Scott started out his career working for a company that sold copiers. He learned about networking when copiers went from analog to digital, and companies wanted to connect their new printers to their PCs. So, Scott started working with routers, switches and everything that had to do with creating a network from scratch. Eventually, he led the IT service division of the business.

“I was very well versed in computers and already had certifications by that time, so it was just a natural progression to work in IT services,” said Scott. “Anytime something new came out, I would volunteer for it and it just spiraled from there.”

While IT services went up, the copier business went down, and that’s when Scott made the move to Accent. In his nearly four years on the Project Team, Scott has been able to do what he loves - ride the cutting edge of technology - while helping Accent clients evolve their businesses through the adoption of the latest hardware and software.

“The newest stuff goes to the Project Team. We have to set it up and get it working for the rest of the team,” explained Scott. “It could be a new platform, or working with cloud infrastructure, that kind of thing. That’s where I like to be, learning new things.”

The collaborative nature of the Project Team makes it a great place for Scott to both learn and share his knowledge. Team members are always bouncing ideas off each other, and communication channels are open.

“Scott’s really good at taking on the mentor role and leading somebody through a new type of project or a new task that they're not familiar with,” said Scott’s supervisor, Chris. “You never feel like you're going to offend him or that you can't be honest with him. He's really receptive to feedback and I appreciate that about him.”

The level of communication found at Accent is something that Scott had not previously experienced. Monthly all-hands meetings let employees know what’s going on, whether it’s celebrating when a new client is signed, or leadership sharing projections for future growth and the financial health of the company.

This kind of transparency allows employees to see the big picture, and Scott likes knowing the ins and outs of the business as a whole, and it makes him feel like he’s a part of it. He also knows that leadership is genuinely interested in his input.

“The managers and the owner are very easy to talk to. They have an open-door policy if you have any issues. You can talk about anything,” said Scott. “And it's a small enough company that everybody feels like they know everybody.”

Recently Scott was asked to temporarily move to the Service Team to fill a technical gap in their ability to attend to escalated issues. In many ways, the Service Team is quite different from the Project Team because they’re focused on troubleshooting issues instead of creating something new. That didn’t matter to Scott. His attitude was all for doing whatever was needed.

Everyone knows that this role is temporary, but there might be a little good natured tug of war going on with the Service and Project Teams, both wanting Scott’s skills and his presence.

“He’s been getting great feedback and great reviews from the service teams. They love having him and I’m pretty sure they’re trying to steal him from us,” said Chris, Scott’s supervisor on the Project Team. “He has a great attitude, even in situations where a client is down or he’s stuck. I can joke with him and we can laugh and learn from our challenges.”

When it comes down to it, whether it’s helping clients by troubleshooting or implementing new technology, it’s progress with technology that really keeps Scott going.

“I don’t like to see people stuck in the stone age,” he says. “If I can help somebody, it makes me feel good. It’s like helping them go from driving a Flintstones car to a Maserati.”