Turning a Passion into a Career – A Spotlight on Corey S. 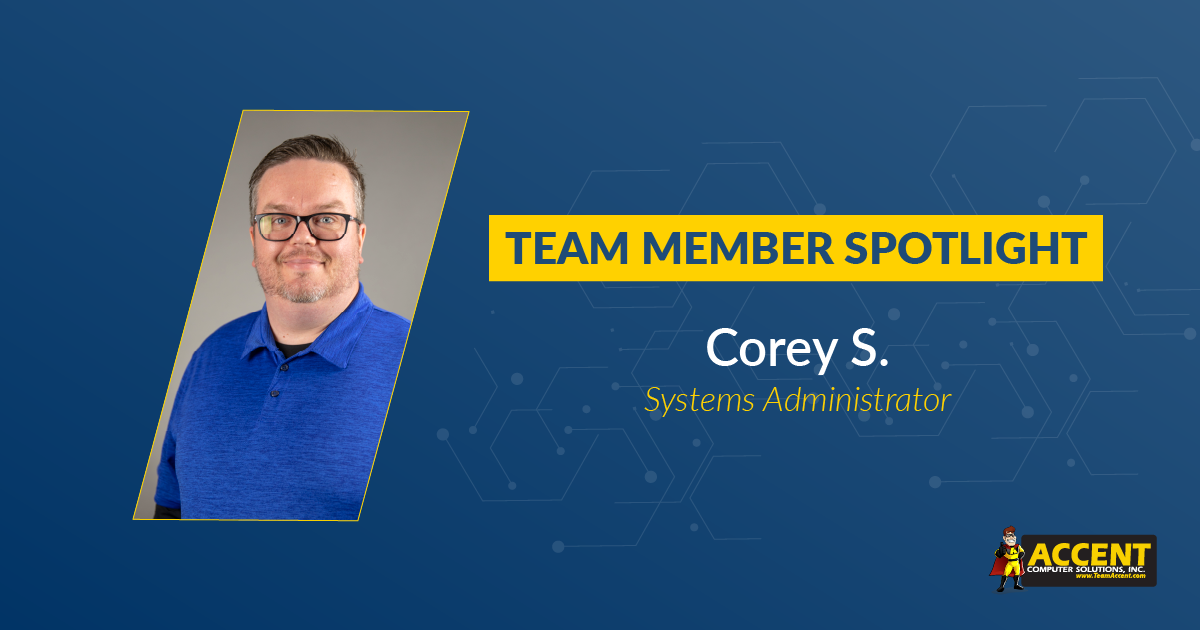 Imagine landing an IT job that allows you to do what you love, follow your passion for computers, interact with coworkers who are an extension of your family – and get a paycheck for it. For Corey S., a systems administrator at Accent Computer Solutions, this is his everyday reality.

Accent is unlike any other place Corey has worked before, and each time he solves a difficult issue or makes a client happy, he knows that joining the team was the right choice for him.

“At Accent, it’s not all about work,” said Corey. “It’s togetherness, bonding, and family, and somehow you still get a paycheck for it.”

The Face of Accent

Corey first started working at Accent three years ago as a systems technician, answering client phone calls in the queue. Last year, he was promoted to the position of systems administrator. As part of the elite field team, he spends much of his time out on the road, visiting Accent clients that already have well-established IT infrastructure and staff. He makes sure different components, servers, and networking equipment are maintained and running correctly.

Whether he’s double-checking the presence of a fire suppression system, troubleshooting error messages or completing updates, Corey knows that for many clients, he may be the only person from Accent that they interact with face-to-face.

“I’m acutely aware that when I visit these clients, I have to accurately represent the whole company and what we’re capable of doing,” Corey explains.

Updated His Skills to Make a Career Switch

Although Corey has always been passionate about computers since he was young, his career in IT didn’t begin right away. After high school, he served in the U.S. Army, then worked for an electronics retailer until the financial crisis of 2007-2008.

At that point, he realized he needed to update his skillset and went back to school to obtain a degree in computer information systems with an emphasis in cybersecurity. When he graduated, he joined the team at Accent.

“Corey is someone who's always looking to contribute,” said Ray, Support Services Manager. “He wants to know what team is being challenged right now with ticket count or complex issues. And he's always looking for how best to insert himself to help that team out and that's a consistent thing.”

While Corey feels a sense of accomplishment through his work at Accent, his real inspiration comes from outside the workplace. As a busy father of five children, he enjoys sharing his career journey with his family and gleans motivation from their excitement in seeing him remove barriers in his life.

“I’ve got a great family and am a dad to five kids – three of whom are adults now,” said Corey. “I have really enjoyed seeing how they have viewed my transition from a retail worker to someone who takes great pride in what I do.”

Rising to the Challenge 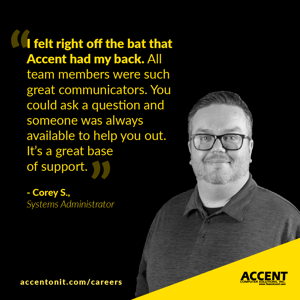 Corey attributes much of his professional growth to the people and culture at Accent. He immediately felt supported as an equal member of a team that encourages its engineers to constantly improve and learn new things.

With all team members frequently communicating with each other, Corey knew he could ask a question or call for help and someone would always have his back. The team appreciates what he brings to the table too.

“Corey tends to have a lot of ideas. He’s always trying to bring something new to the table and he engages with myself and other managers with ideas on how to do something better or to improve on an existing process,” said Ray who is also Corey’s supervisor.

Corey credits the management at Accent with being able to proficiently place the right people into the right positions where they will be encouraged to grow. Instead of shying away from challenges, Corey and his team members rise to meet them, eager to learn and find new ways to solve problems. It’s what drives them to put forth their best effort every day and allows Corey to not just accomplish his responsibilities, but to thrive.

“Management has never held me back on anything,” Corey said. “I can thrive at Accent because I have the ability to not only do the job that they put in front of me, but to also take the time to assist another person or have another person assist me, all as a team.”

It’s easy to work with a team that feels more like a family. Corey values the relationships he’s built with other Accent employees because they extend beyond work. The team’s ability to weave personal triumphs, family matters, and hobbies into what they do to assist each other on the job gives Corey a richer experience and deeper connection to the organization.

With positive attitudes and daily encouragement, Corey feels a sense of appreciation at Accent that he hasn’t experienced anywhere else. That motivates him to keep showing up for work each day. His role at Accent doesn’t feel like a job or a chore at all. He gets to live his passion for computers – and just happens to get paid for it.