Taking Nothing for Granted – A Spotlight on Corey Kaufman

Corey Kaufman was 15 years old when his dad dropped him off for his very first day of work for Accent. Turns out he needed steel-toed boots to do the work he was assigned, stringing cable at a client site. His dad, Marty Kaufman, owner of the company, had to turn around and pick him up and take him to a nearby store to get the footwear he needed to enter the construction site.

Corey made sure that didn’t happen again and little did he know back then that this on-the-job training was the start of a learning journey that would lay the foundation for his future career.

As a teenager and during his college years, Corey spent his summers working for Accent. Whether it was assisting with big cabling jobs, quoting and scoping for small IT projects, or even peeling stickers off a company van, he did whatever was asked of him.

Didn’t Set Out to Work at Accent

Funnily enough, as he was growing up and his dad was growing the business, Corey didn’t have his eye on a career at Accent, or even in the IT industry. He wanted to be a lawyer.

Corey graduated from San Diego State University with both a B.S. degree in Business Administration and Management, and a B.A. degree in Political Science and Government. However, he turned away from the legal field after an internship experience demonstrated to him that the work involved with being an attorney was not what he imagined.

As he started to weigh his options, he had a conversation with his dad. Marty told him – I’ve got a spot for you if you’re interested. He was.

Learned the Business from the Ground Up

When he came on full-time in 2009, Corey became the Service Delivery Manager and was responsible for a team of just over 20 people who made up the help desk, field team, and professional services. He reported to George at this time.

His next step was working with clients to consult with them about IT strategy with Derek as his supervisor. Corey didn’t actually report to his dad until he took over the sales function of the business a few years ago.

“Since the day I met Corey, he has never fallen into the ‘owner’s son’ stereotype. He takes nothing for granted,” said Derek, Accent’s COO. “He has not only learned how the business is operated from the ground up but has excelled at every role he has taken on.” 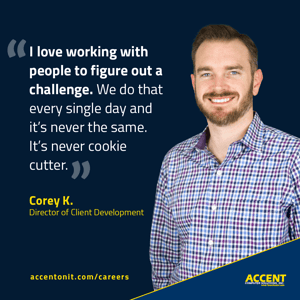 Corey is now the Director of Client Development. His path to this leadership position has been paved with on-the-job training, a curiosity that feeds his desire for learning, and a passion for helping people solve problems.

“I like to help people figure out solutions,” Corey explained. “On the sales side, this is essentially figuring out what challenge you have and how I can help you solve it. On the customer side, it’s looking at environments and their business, figuring out what problems they have and what they might potentially do to solve that. It’s similar with employee development.”

Listen and Learn Until It Clicks

Surprisingly enough, Corey’s career has progressed without him ever tearing down and rebuilding a server.

How could someone without technical training gain the expertise needed to manage a technical team and talk with business leaders about how they should invest in IT? The answer to that is what Corey says to the Technical Advisors and Client Success Managers who are new to these roles – one day it just clicks.

“I would go for ride-alongs to meetings with Derek or Marty. I would sit there and think – I don’t know how I would ever know how to answer that question,” reflected Corey. “So, every time I would leave one of those meetings, I would try to commit to memory what they said. As you do that more and more, eventually you just start answering those questions.”

Corey’s professional development has included sales training and training to earn his credential as a CMMC Registered Practitioner, but it’s mentorship from Marty and Derek, and involvement in IT industry peer groups that has really helped him to hone his skills.

His background gives him a unique perspective that he brings to the leadership team. He’s always looking forward and his approachability is part of what makes people want to follow him.

“Corey has a unique ability to make the client, prospect, or any other human feel comfortable,” shared Marty. “His knowledge and communication style makes working with him easy. His desire to provide the best experience for the customer shines through.”

Level of Commitment from Family Can’t Be Rivaled

As Director of Client Development, he oversees two teams -- one internal facing and the other external. Both are focused on strategies to make forward progress. For outside sales, it’s about finding new customers who want to use technology as a propeller for their business. On the client side, it’s helping companies develop and implement strategies that enable their goals.

Corey says that working with his sister, Courtney, who is Director of Marketing, gives Accent a unique advantage. He says that not only is she a fantastic marketer, but there’s a commitment that they share that can’t easily be replicated.

Commitment is something that others recognize in Corey, too.

“Corey has a unique commitment to increasing value to our clients,” said Derek. “His client success mindset provides Accent an advantage over competitors. He constantly pushes Accent to higher levels of customer service, never satisfied with being less than extraordinary.”

Corey may not have envisioned himself working at Accent when he was a teenager, but he can’t imagine not being here now. He’s faced challenges at every level of his professional journey and worked hard to grow his knowledge and skills. There’s no doubt that he’s earned his place at Accent.