Opening Doors Through Confidence in His Team – A Spotlight on Steve K.

When he came to Accent at the end of 2019, Steve already had experience working in Business Development at other IT companies. He could tell right away that Accent is different. This is a company where people care and keep their promises. This is a company that could truly deliver what he was selling. And he soon discovered how much they care about his personal success as they provide him with lots of mentoring -- and the thing every business development rep appreciates, good leads.

“IT is a very competitive industry where every company looks like the other,” said Steve. “This company cares about you. They have a lot of people on staff, and they know what they’re doing.”

More Than a Manual and a “Good Luck” 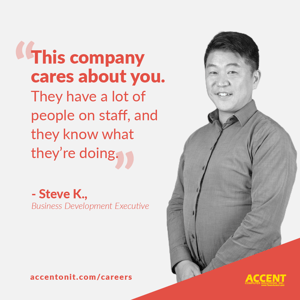 Steve’s ramp-up with Accent included lots of time with Corey, Director of Client Development. At previous employers, he was sent out with a manual and a “good luck.” Corey, however, spent hours with Steve to make sure that he completely understood what a good fit looked like and that he was comfortable with how Accent wanted to approach prospective clients.

It was only a few months after Steve started at Accent that the COVID-19 pandemic hit, and that approach had to change suddenly.

“I really appreciated Steve’s ability to adapt,” said Corey. “He thrives on meeting people and making connections, but he had the ability to adapt and figure out other ways to connect, which was impressive.”

Not only is Steve adaptable, but he’s also fearless, honest, and driven. That’s a great combination for a sales professional who spends his days starting conversations with strangers, building relationships, and brushing off all the “no’s” on his way to the next “yes.”

“Steve has the ability to take a ‘no’ and keep going on to the next one. He doesn’t take it personally,” said Corey. “He just focuses on the next thing in front of him, which is a fantastic quality to have in a salesperson.”

People Are Safe to Be Themselves

Steve covers a huge territory that includes Los Angeles and Orange Counties as he seeks out companies that would benefit from Accent’s managed IT and security services. The marketing department uses sophisticated technology to provide him with leads. In addition, he meets weekly with the Sales team and participates in meetings with Technology Advisors to further his understanding of how the company serves its clients.

“Corey invited me to learn more about the technical side, and I’m doing presenting to our ProVisors networking group now,” explained Steve. “No other IT company does that because they don’t want you to know too much. Here, they want you to know what they know.”

There’s a lot of sharing of knowledge that happens at Accent, and one of the reasons for that is because people feel safe to be themselves. Steve has found that there’s a sense of family that plays out in everyday interactions that allow people to feel accepted, supported, and valued. This is the kind of environment that begets trust, and trust is essential for teamwork and happy customers.

“I can trust my coworkers to get the job done,” said Steve. “I’m so confident. It’s crazy! When I go out there to do my job, I know I have the truth, which is the best service, best knowledge, and best experience for customers on my side.”

Staying in the Race for the Long Term

That crazy confidence resulted in a win for Steve and Accent when he decided to walk right into a business and start a conversation one day. That company became a client two months later.

That’s a pretty fast sales process for the IT industry where it can take months or even years of nurturing before a prospect becomes a client. But as Steve says, the turtle wins the race, and at Accent, he gets acknowledgment and appreciation for staying in the game and playing out the process in the long run.

No doubt there are a lot more wins in the future for Steve. While he’s been approached by other companies during the time he’s been at Accent, he won’t be lured away even for higher pay. He wants to stay where people are free to share and speak up, where people listen, and you can have a two-way conversation with leadership.

“I think the number one thing that differentiates Accent is their culture of honor for each other,” he says. “I feel there’s a culture of joy in the midst of the hard work, and it’s the culture that makes me not want to leave.”