Playing IT Like a Team Sport – A Spotlight on Jared 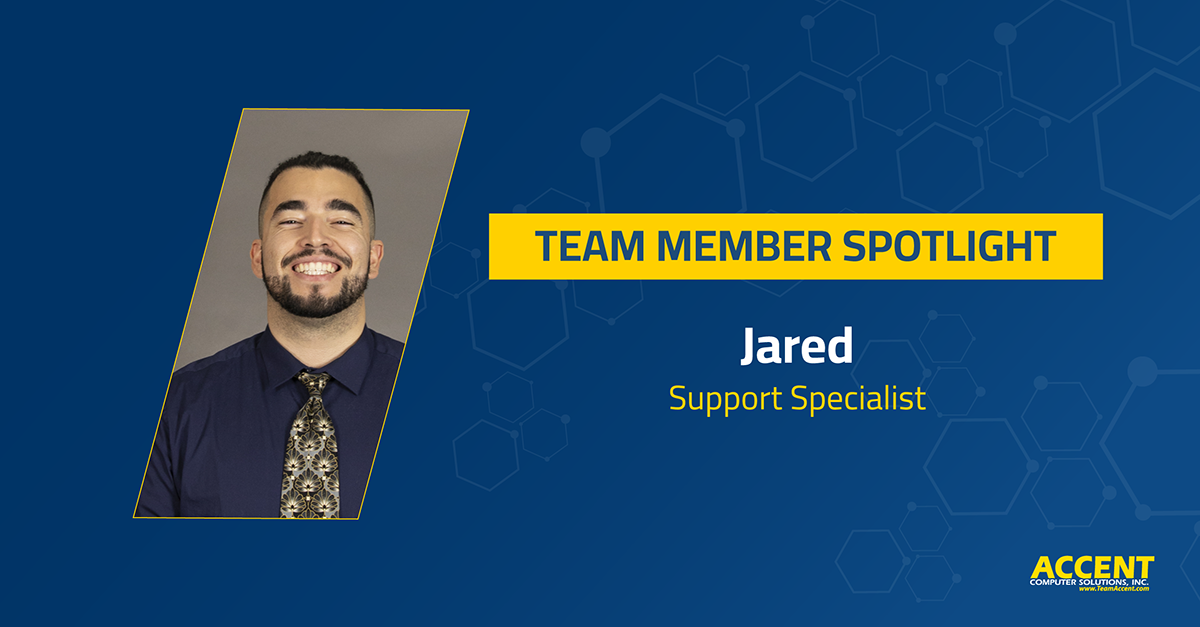 For Jared, being a Support Specialist at Accent is like playing a team sport at a highly competitive level. Everyone on the Alpha team relies on each other, so their participation needs to be at a level where they’re lifting everyone up. Add to that a current of healthy competition between team members, and it’s intense from the second Jared’s day starts until it ends.

“We know that if we’re not operating as we should be, it’s not just ourselves who are going to suffer. It’s our friends and teammates,” explained Jared. “That really brings out the best in me and my team as well.”

A Calming Influence and Good Reputation

The Alpha team is on the front line responding to support requests from users at client companies. Jason B. leads the team and says that Jared hates seeing a client frustrated and will go out of his way and do anything in his power to resolve their issues.

“Jared has a very good reputation with clients and has a way to calm people even when they’re frustrated,” said Jason B., Alpha Team Manager. “He’s one of the most dedicated guys on the team, and his coworkers rely on him because of his knowledge, passion, caring, and the work ethic that he portrays on a daily basis.” 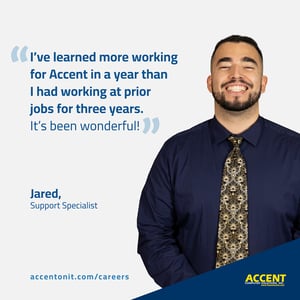 Jared gets satisfaction from helping people get out of a bad spot. He’s also stimulated by the challenge of fixing something he’s never fixed before. He knows that being stretched is how he grows his knowledge and skills. He also appreciates the opportunities he has to learn from others.

“In my prior IT jobs, I was the resident smart guy on the team who you would go to for help. If I didn’t figure it out, that was pretty much it,” said Jared. “Now I’m not the smartest guy in the room anymore, and because of that, I’ve learned more working for Accent in a year than I had working three years at prior jobs.”

Flexibility When Life Throws a Curveball

Opportunities to grow aren’t the only thing that’s different for Jared compared to other places he’s worked. At Accent, he knows that his voice is heard, and management is open to learning about his opinions and his ideas for improvement. He’s also found flexibility when life throws a curveball.

An old back injury from his high school football days resurfaced at the same time that Accent employees were returning to the office. It was difficult for Jared to sit for long periods of time, which made commuting impossible. He could still work but had to do it in more of a horizontal position, so he arranged with management to continue working from home while undergoing treatment.

“Accent has accommodated me personally in ways that I’ve needed them to,” said Jared. “They’re dedicated to making sure that we’re able to do the job, and then from there, it’s just a matter of how hard we want to work.”

Synergy and a Sense of Humor

In addition to Jared’s inner drive, he’s inspired by his boss and fellow team members, who have become more than just coworkers. They’ve become his friends, and Jared believes that’s what sparks the synergy that pulls the team forward together. That… and a sense of humor.

When he’s in the office, you might hear Jared singing a random song and his teammates telling him he’s a bad singer. Rest assured, he won’t be quitting his day job for a music career any time soon. In any case, he’s found a niche at Accent where he can help people and excel and grow personally at the same time.

He said, “If you want to develop yourself faster and more completely than you ever have before, if you want to work hard, and if you have a good sense of humor – you’re coming to the right organization.”