If Johnny Olesh were a race car driver, the first thing that he would do when he crossed the finish line would be to acknowledge and thank his pit crew.

As a team service manager at Accent, Johnny doesn’t drive a race car, he manages a team of IT professionals who consistently receive the highest in client satisfaction ratings. Working with his team is the best part of working at Accent for Johnny, and he much prefers that they receive recognition instead of him.

“I’ve heard that our clients are very satisfied with the level of service that my team provides, and I try to tell my teammates as often as I can, that without them, I really couldn’t do what I do,” said Johnny.

Growing Into a Leadership Position 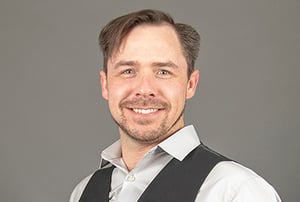 Johnny’s first position at Accent wasn’t leading a team. In fact, he’s had several positions with increasing responsibility at the company since he began as a Network Administrator.

When he initially interviewed, Johnny thought that his lack of certifications would be viewed as a disadvantage, but he asked for a chance to prove himself and he got one.

“I simply asked them for a chance. I said -- I’ve done this for a long time. I don’t have any certifications, but I’ve been in IT for 15 years,” said Johnny. “I just want to show you that I know what I’m doing. They said – We’ll give you that chance. Show us.”

And he does -- he continuously shows that he's the right person for the team.

"Johnny understands where we are heading as a department and undoubtedly brings an added value to any conversation he takes part in," says Johnny's supervisor, Ray Chavez, Support Services Manager. "He is the kind of leader you want to bounce ideas off and brainstorm endless possibilities. Couple that with the fact that he genuinely cares about all aspects of the organization and you have yourself a winner."

Conversations Revealed a Culture He Desired

Johnny’s desire to work at Accent was spurred by several conversations that he had over the course of a year with a buddy who worked here. What attracted him to the company was how his friend talked about the culture: how teamwork played out in day-to-day activities; the importance of work-life balance; how good work was recognized; and professional development supported.

This was totally different from what he was experiencing as the IT manager at a large corporation.

“At my previous job, I went to work every day for 10 years being anxious about my job and future,” said Johnny. “At Accent, it’s completely the opposite. I haven’t come in here anxiety-ridden even one day. Even if it’s a stressful day, it’s a great place to work. It’s a complete flip from what I experienced before.”

The work that Johnny and his team do is inherently stressful. They’re on the front lines, responding to client support requests and managing emergencies, all while maintaining client expectations. The team pulls together and does what it takes for the customer while management facilitates improvement. What results is a can-do atmosphere where problems are viewed as solvable, and no one person ever feels like they must carry the load alone.

“Despite the stress, we’re all still very happy to come to work and be together. It’s really something special,” said Johnny.

Johnny Cares, Always Goes Above and Beyond

The level of service Johnny's team provides stems from his leadership and his overall desire for a job well done.

When you ask Johnny's teammates and supervisors what it's like to work with him, they only have positive things to say. They know they can count on him, no matter what.

"What’s special and unique about Johnny is his level of care and engagement. He cares and is totally engaged for the best results of his team members – individually, his team collectively, his clients and Accent as a whole. He absolutely cares and will always be determined to add value to the these groups," says Derek Woolf, Accent's COO.  "Johnny’s attitude and commitment is a perfect example of being extraordinary. He always goes above and beyond."

At Accent, teamwork includes mentoring because in the complexity of the IT world, one person can’t know everything, and there isn’t a tried-and-true formula to fix every issue. Very often through problem solving, you learn something new and to Johnny, it’s important to pass that knowledge on.

“I’ve always tried to help others because I’ve been in that boat more times than I can remember,” he said. “If there’s an opportunity to teach somebody something I already know, then it not only benefits that person and their skill set, it benefits our whole team, as well as our clients.”

Recognition and Appreciation of Teammates

Teamwork is a recurring theme with Johnny as he talks about his experiences at Accent Computer Solutions, and if there are to be “Hero” nominations for anyone at the monthly “All Hands” employee meetings, he would prefer that his team members receive them, not him.

“I know from the feedback I get that I do a great job, but I want my teammates to feel appreciated,” said Johnny. “I’m just driving the car.”

Johnny joined Accent Computer Solutions because he wanted a dynamic tech career at an organization where he could look forward to going to work each day.

If you're stuck in a job where you feel like your success is limited and you're going it alone, it's time to explore a career at Accent. Browse our Career page to learn about current opportunities.