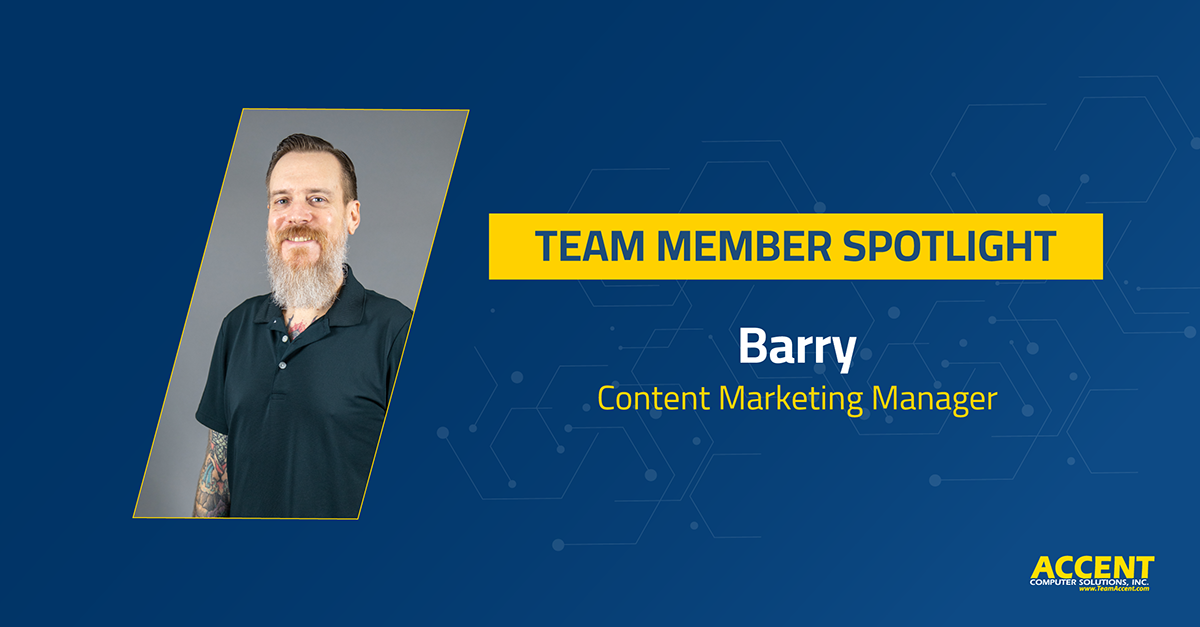 When Barry was interviewing for a job at Accent, he could tell right away that this company was different from other places where he’d worked. For one thing, they were transparent. That has turned out to not only have an impact on the relationship he’s built with his employer, but it’s affected how he does his job -- in a good way.

As Accent’s Content Marketing Manager, Barry’s job is to create, publish, and promote content that will generate sales for the company. This is a challenge in the competitive IT industry, but the straightforward approach of simply answering questions that people have as they weigh their IT support options gives Barry a clear vision of how to implement Accent’s content strategy.

“Our goal with the content we publish is to answer questions. We want people to know what they are getting into not only with our company, but any managed IT services provider,” explained Barry. “The content we create feeds into the philosophy of being transparent by answering the questions most companies would rather not disclose until after the sales process has started.”

Another thing that has stood out to Barry is how family-oriented the company is. Having a balanced life is one of Accent’s core values, but he’s never seen it played out as it has at Accent. He often felt like management lacked respect for personal-professional life boundaries with previous jobs.

It’s different here because the family that owns and leads the company practices what they preach. Family is important to them, which translates over to the rest of the staff. It’s so important that they put balancing home and work life in their core values. “I’ve worked for companies that have had core values, and it felt like they were just making them up,” said Barry. “Here, every single value is specifically designed to address something that employees and the company needs to focus on. I just haven’t experienced this anywhere else.”

What Barry also had not experienced before coming to Accent is the opportunity to have his voice heard. He’s found an openness here that gives employees the freedom to talk about issues they’re experiencing and to share ideas they have for improving the company.

This isn’t Barry’s first time working for an IT company. He’s actually been in the industry in one capacity or another since 2001. As a result, he’s witnessed how technology has evolved and how the need to educate business leaders about IT has grown.

As Barry makes technology topics more understandable, he knows that he has an impact on company success even if he doesn’t work directly with clients and prospects. In addition to having responsibility for the company’s content strategy, he creates marketing assets that support his teammates’ specific communication needs.

“Barry has an incredible can-do attitude. He has a genuine desire to help anyone who needs it,” said Courtney, Director of Marketing. “He’s in constant communication with the sales and client success teams to make sure they have what they need to be successful.”

Even though Barry has only been working at Accent for less than a year, he sees his future here. He likes how the company does business and how people are treated.

“They take care of their people, and they’re providing services that businesses genuinely need,” said Barry. “Everything that I’ve experienced up to this point has me saying that this is a company I want to stay with.”