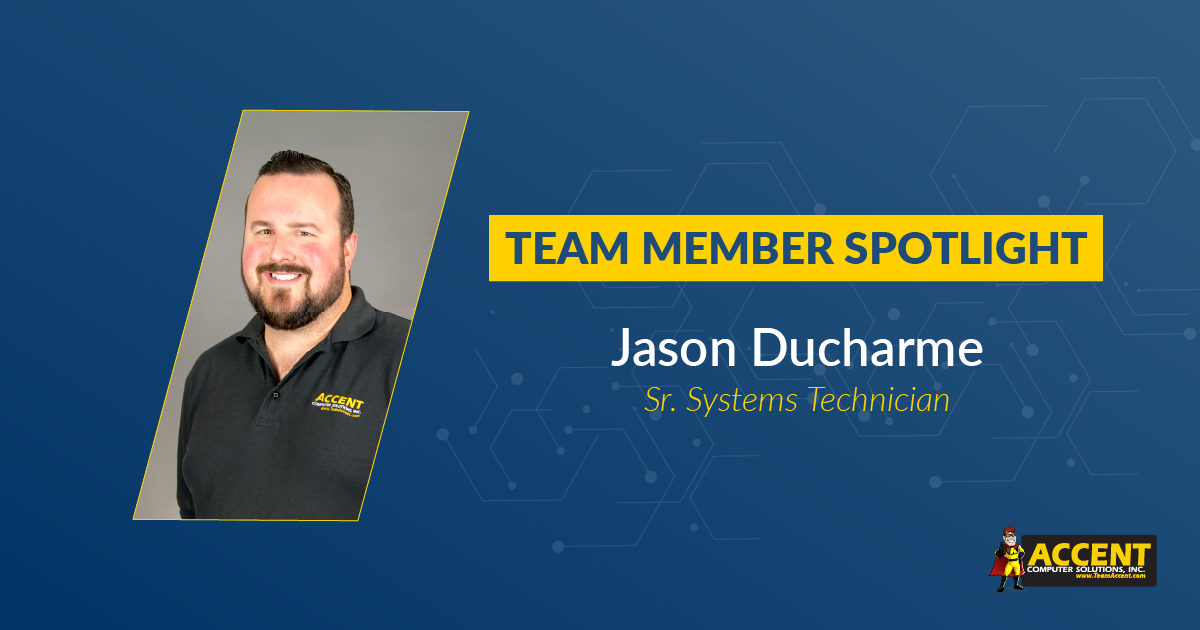 Jason D’s official job title at Accent is Senior Systems Technician, but what he really is, is a road warrior. Instead of sitting behind a desk all day, Jason spends much of his time behind the wheel traveling to client sites to troubleshoot hardware and network issues that can’t be fixed remotely. It’s a job that he loves because there’s variety in each day and because he enjoys the face-to-face interactions he has with clients.

Jason has worked at Accent for 11 years. He’s good at his job and he understands that computers and connectivity are the lifeblood of today’s businesses. If the people he meets when he arrives at a site aren’t in the best of moods, he doesn’t take it personally but uses friendly banter (along with his tech skills) to help clients get back up and running – and in a better mood.

“When you realize that network infrastructure isn’t just technology, but people’s paychecks and their livelihoods, it’s a great feeling knowing that you could get them back to business as usual,” said Jason.

You might think that the COVID-19 pandemic stopped onsite work but there are lots of companies whose activities cannot be done remotely, and Jason’s road time has stayed about the same. What did change, however, was the addition of protocols like wearing a mask and gloves, and diligent use of hand sanitizer between computers to keep himself and others safe.

He’s also been more conscientious than usual about keeping a consistent schedule so that he can get home to be with his kids after work. Jason’s wife is an RN on the night shift for the COVID unit at one of the area’s hospitals and when he gets home, she’s off to work. Even if he’s had to drive to Irvine or LA, his supervisor and the team at Accent help him make sure that his schedule doesn’t spill over into his family obligations.

Variety and Being On the Move Keep His Job Interesting

According to Jason, Accent truly has employee best interests at heart and that goes for making sure that people are happy in their job role. There was a time when management considered moving him to a different role where he didn’t feel he would be as happy. He voiced his concerns which were received with no argument from management, and he stayed put where he felt he was best suited for the work.

“I’m not one who enjoys sitting behind a desk all day. I’d rather be moving around, and the onsite aspects of my job very much provide the variety that I crave,” said Jason. “It keeps the job interesting and exciting for me to be able to see clients and I’m definitely a people person. Hopefully, clients attest to that.”

They certainly do says Jason’s supervisor, Johnny, Team Service Manager, and he attributes it to Jason’s way of communicating that starts with being a good listener. Being a good listener validates the other person’s feelings and helps people to open up, which gets to the heart of the matter faster whether he’s working with his own service team or helping out another team.

“Jason doesn’t see a client as yours versus mine. He sees a client as ours and acts as the eyes and ears that we need onsite” said Johnny. “He’s consistently assisting across teams. There isn’t a week that goes by where he’s not helping another team.”

Tight-Knit Teams Support Clients and Each Other

There’s a strong team ethic at Accent both within and across service teams. Each team sees itself as a singular unit to support clients and each other.

“We’re very tight-knit when it comes to each other within our teams,” said Jason. “If one of us has a problem, we all just fly that problem until it’s fixed. Somebody always has your back. You’re not in this alone.”

When it comes to supporting co-workers, there’s no such thing as a stupid question according to Jason. Starting out as an Apprentice, Jason has had plenty of opportunities to ask questions and learn from his peers. He’s also been able to pursue 12 certifications with company reimbursement for testing, and even paid time to take exams.

Jason recognizes the effort that management at Accent puts into enabling fulfilling careers for him and his co-workers, and in having an open-door policy when it comes to communication. He feels that his opinions are heard, and suggestions taken to heart. He’s going to be at Accent for a long time if they keep doing what they’re doing.

“It’s the camaraderie. It’s the accessibility. It’s looking out for each other. It’s the concern for your personal life,” said Jason. “All of that makes this a business where I can thrive.”