If It’s Out There, He’ll Find It – A Spotlight on Richard 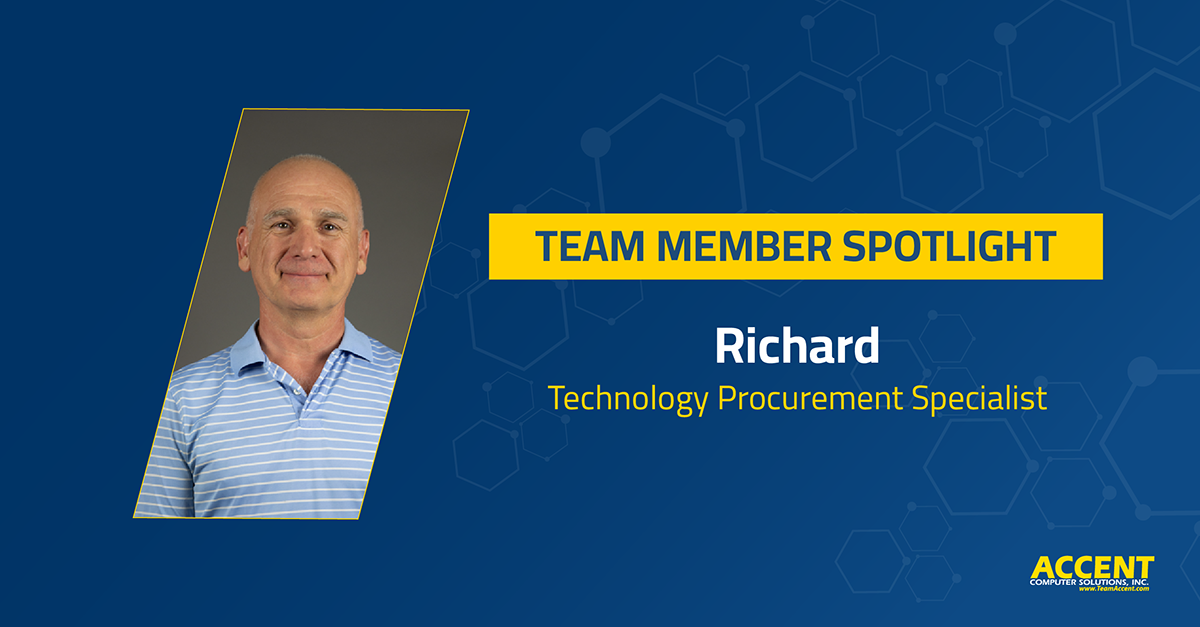 When Richard started working at Accent as a Technology Procurement Specialist in mid-2021, he didn’t realize how supply chain bottlenecks would make his job so challenging. It’s a good thing that he likes problem solving because sourcing technology hardware and components in the current conditions is like putting together a puzzle.

It’s also a good thing that he’s a great communicator because as he works to fit all the pieces of a customer order together, he’s going back and forth with coworkers, vendors, and customers to make sure that there are no surprises for anyone.

“We have a wide variety of sources, but these problems are very persistent, wide-ranging, and constantly changing,” Richard explained. “We try to get what is specified in the quotes, but sometimes that’s not possible within a reasonable timeframe, so we present the options and then make the best choices.”

Molding the Position into an Efficient Business Function

The Procurement Specialist role at Accent is new, and Richard’s input has been vital to molding the position and the processes that go along with it to create an efficient business function. On a typical day, he’s meeting with the Client Strategy and Success team and other Accent teams, talking with vendors and touching base with customers, all while monitoring the progress of orders from quoting through fulfillment.

“When we hired Richard, we had a rough outline of what the role would look like, and we told him this up front, and also that we were going to work together to firm up that outline,” said Jonathan, Technology Advisor Supervisor.

This is Richard’s first experience in procurement, but he’s spent much of his career working with technology, most recently as a software system administrator. This is also the first time he’s worked at a managed IT service provider where there’s a wide range of technology to work with.

Every project he’s involved with gives him opportunities to learn and expand his knowledge.

Support Along His Learning Curve 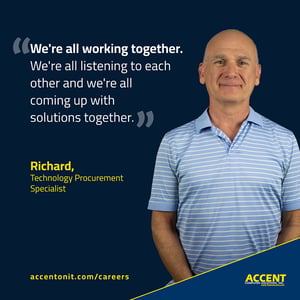 As Richard has been getting used to a new role in a new industry, he’s found that Accent is generous in providing him with the resources he needs. Whether it’s product training or a sharing of information from the team, he’s been able to quickly get up to speed with whatever it is he wants to know.

“Because sourcing technology is fairly new to me, I’ve really had a pretty steep learning curve, but everybody’s there to support me, and I’ve learned an amazing amount in just the nine months or so that I’ve been here,” said Richard.

Richard says that at Accent, people actually want to help each other, and there’s a lot of listening going on, not just talking. When it’s evident that a different direction is needed, ideas are exchanged, and the team pivots. Everyone is focused on how they can be most efficient and what’s best for everyone. No one person feels the need to take credit for the outcome.

At the same time, Richard feels that his work is appreciated. He gets constant feedback from coworkers and often clients. They mention his accuracy, speed, and ability to be flexible and calm in stressful situations.

“Richard has this calm, confident energy. He doesn’t panic even when he has to deal with an unpredictable supply chain and all of the questions that come back to his seat,” said Jonathan. “He takes it all in stride and communicates with a reassuring tone.”

When situations are difficult, reassurance goes a long way. Who knows how long Richard will have to maneuver through the high demand, low supply issues that make his job so difficult in the technology marketplace?

As long as it takes because he’s the go-to guy to track things down, chase vendors, and get his hands on stuff that no one else can.

If it’s out there, Richard will find it.