Eager to Learn the Next Thing – A Spotlight on Philip 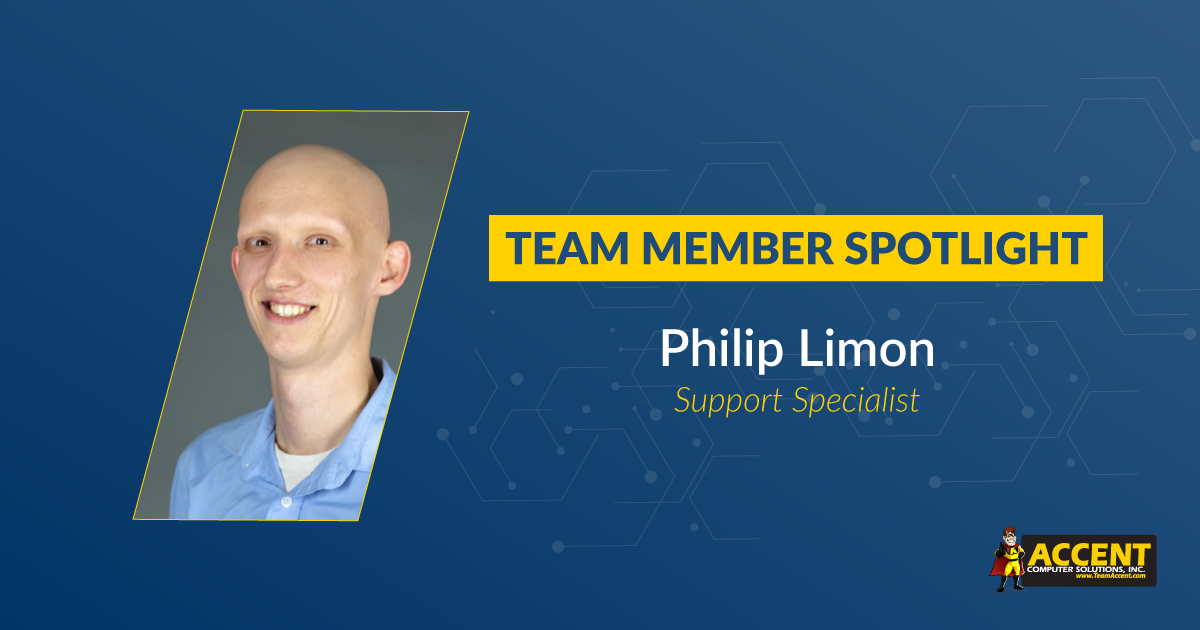 Unless you know what goes on behind the scenes, you never realize just how much work goes into keeping IT systems running smoothly. That’s what surprised Philip when he started his job as a Support Specialist at Accent Computer Solutions.

In this role, Philip takes calls from people who are experiencing issues that stall or stop their work. As he works to remedy their problems, he recognizes that what he does makes a difference to their day – and his.

“If their stuff isn’t working, they’re floating in the water. So being able to genuinely help this person when they were stressing out about it, that’s probably the part that makes my day, any time it happens,” said Philip.

First IT Job Fresh Out of School

Philip hasn’t always worked in IT, but when he decided to pursue a career in the technology industry, his path has gone nowhere but up. Fresh out of school and with the CompTIA A+ certification under his belt, it was Accent who approached him and offered him his first IT job.

He’ll admit that at first, it was rough to learn the business of IT management, but he found the Accent team to be extremely supportive and available to answer questions. After a few months, everything started to fall in line. He became more comfortable with the work and saw how he was able to apply his education to finding solutions to issues even when he was faced with something that was entirely new to him.

“There are so many issues that come up every day,” said Philip. “Whenever I think that I finally know it all or that I’ve seen all of the issues, then something comes up that makes me scratch my head and rethink my entire processes.”

Piling Up Certifications to Expand His Knowledge

Philip enjoys the challenge that new issues bring because they test his skills and make him stretch. He loves learning so much that he added three new certifications to his credentials in his first year at Accent. The company encourages and supports this type of continuing education by covering the cost of the exam and giving the employee a bonus.

“Phillip always wants to learn the next thing,” said his supervisor, Erik. “He’s always asking ‘What else can I learn?’ I haven't seen anyone in the company pass more exams in such a short amount of time. He’s just tearing through it.”

Reimbursement for certifications is a valuable bonus for Philip, and he appreciates the opportunity to work in an environment where communication is open, people keep their promises, and teamwork is the way that everyone wins. He’s never been let down when he needed support from his colleagues, and he goes out of his way to help them too.

“Philip has become the de facto certification knowledge guy,” said Erik. “He’s always putting together study guides and documenting what he learns to share with us. He also comes up with questions and training opportunities when we have our weekly meetings so that we can all learn together as a team.”

Work Environment Where He Can Contribute

In another company, employees might hold back on sharing what they know but Philip has found that communication is a two-way street at Accent. He knows that if he has a recommendation that could make the business better and help clients, what he says will not be ignored or disregarded.

He also feels that his work is recognized and appreciated. He might get a thank you from a co-worker, or a shout-out at a meeting, but it’s the thank you’s from the people he helps that mean the most to him.

Whether it’s a simple password issue or a software glitch, Philip helps all of his callers and handles the fast pace like a seasoned pro. He’ll figure out what needs to be done to take care of everyone in the quickest manner possible and if he encounters something that he’s never seen before, it’s just an opportunity to learn something new.