Building a Farm Team: The Strategy for Long-Term Recruiting 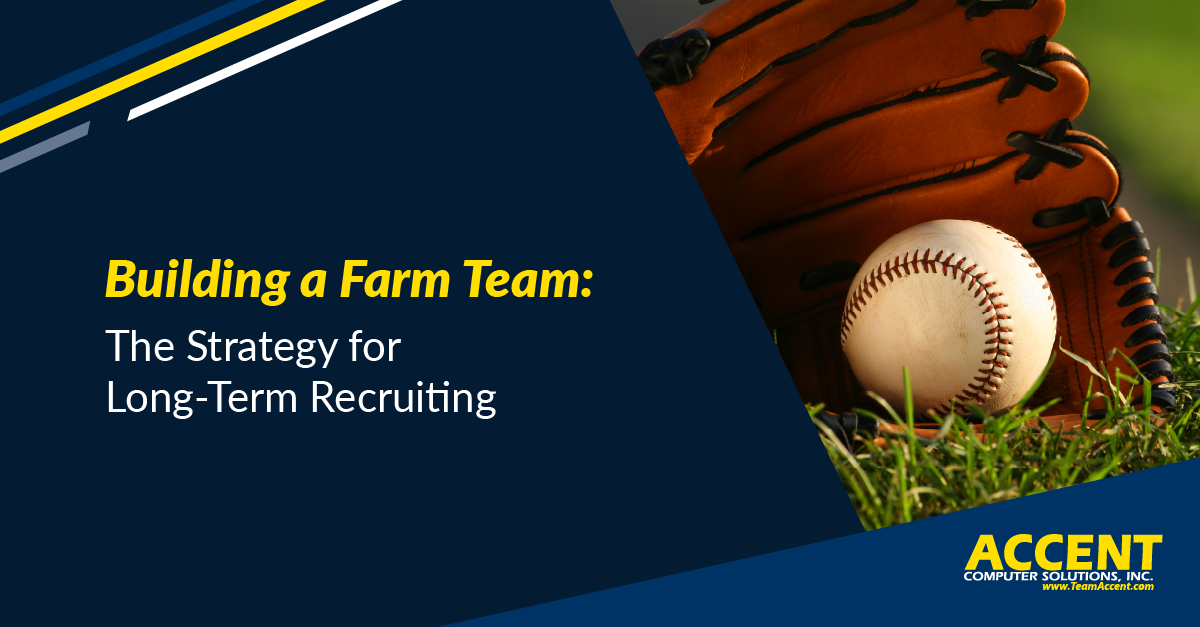 If you want a really good long-term strategy for building talent at your company, look at how it’s done in baseball. In baseball, the beginning of the recruiting process isn’t focused merely on capability. Instead, it’s focused on potential, and that’s the whole reason for the farm team.

The farm team is where talent is grown.

The players on the farm team know how to play baseball, but they’re just not playing at the major league level yet. Everyone has their eyes on the big league, and the players know that what they do in the minors is how they will create a path toward their ultimate professional baseball goal.

Each one of those players has a vision for themselves, and that’s not so different from what we find with IT professionals.

Unlocking Potential in IT Professionals

If you read my October article, you’ll recall that I’ve been calling job candidates and talking with them personally to find out where they want to go with their careers.

I’m asking this question not only because I'm genuinely concerned for their career, but I’m also trying to uncover signs of their potential and how that intersects with the talent that I know we need in the future here at Accent.

What I’m really doing is building our own farm team of IT professionals through an individuals’ potential.

The whole idea of the farm team is to move players up. Players move up as they build their skills through practice and mentoring and as a position becomes available. So you could say that advancement is the sum of hard work and coaching, plus timing.

We have lots of stories of how our employees have developed their careers here at Accent. In fact, in three years of talking with our people to learn about their experiences and publishing their stories, we found that support for professional development is something our employees highly value.

When you’re building a farm team, you have to remember that not everyone wants to be the pitcher. That brings me back to why I’m having these conversations with candidates. It doesn’t do any good to push someone into a position that doesn’t suit them or match up with their personal aspirations.

That’s not to say that goals can’t change. They can, and it’s really interesting how we’ve seen that play out in our company.

Very often, the inspiration isn’t the big-league position. It’s the big-league player that an employee wants to emulate. That says something for the mentoring that goes on here, and I can’t take credit for it. It’s just the kind of people that our employees are.

As I said, building a farm team is a long-term recruiting strategy. It’s easy to let short-term needs dictate how you’re going to fill positions opened up by today’s situation.

I’m convinced that building a farm team is the way to go because not only do players get to move up, it’s how you win the game.